Many thanks again to our 'Spanish Planter' for all the crystal planting records for Spain from last month, here are the ones not previously shared:

Aqua aura planted to "Carmen de Los Martires" Gardens adjacent to the Alhambra in Granada, Spain 15/05/17. This site has a complex history and is now composed of beautiful gardens, with rose garden, fountains, peacocks and ongoing conservation work for amphibians. The crystal was placed to the base of a palm tree to the right of the remains of the cedar tree where St John of The Cross reputedly received some of his esoteric and mystical writings. See photo below. 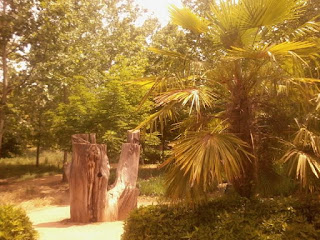 Topaz aura for wisdom and clarity placed to Consistatorial building in the centre of Granada (see photo below), 22nd May, 22.30 hours. This building is the Government centre where decisions are made for the provinces of Andalusia, Algeria and Ceuta (Spanish controlled city on coast of North Africa). 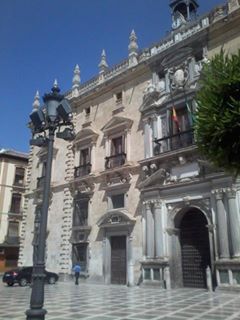 Rose quartz/ Pyrite for general healing to Plaza Larga (see photo below), Granada, 13.55 Spanish time, 23/05/17. This site has been a market pace for centuries and is next to the Albazyin, the old once moorish, part of the city. Once of Muslim heritage it was taken over by Christians in late 14,00's. It's age and history draws many tourists and it is a busy, lively area, with cafe's, flamenco dancing and music but also it also draws the homeless and those with little money. 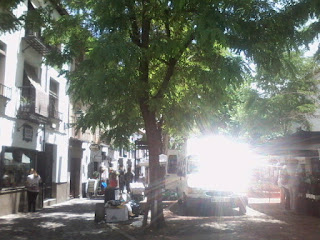 Tanzine aura for creativity and clear seeing to the former home of 'St John of God' (visionary) which is now a cultural centre housing precious paintings and an old people's home and hosts book exchanges and other public events to help those who are ill.

Apologies for not getting the focus for this weeks meditation up yesterday - internet very slow yesterday - one of the challenges of island life at times!Don't forget the amethyst cairn at Old Nisthouse pictured on previous posts is always open to help all in distress across the globe and can be connected to at any time through meditation, positive thought or prayer. This is always a good back up if you don't know the meditation focus for a particular week.

This meditation will use the heart shaped chunk of rose quartz shown below. Hope you can join us.
Don't forget, further details of these meditations can be found in the 'Work' section at www.crystalearthworks.net

Meditation for Planetary Balance and Harmony

Tonight's meditation, through 8pm GMT, is for planetary harmony and balance, using a chunk of planchite with four snow quartz as shown below.
Hope you can join us in meditation, positive thought or prayer using this image as a focus. 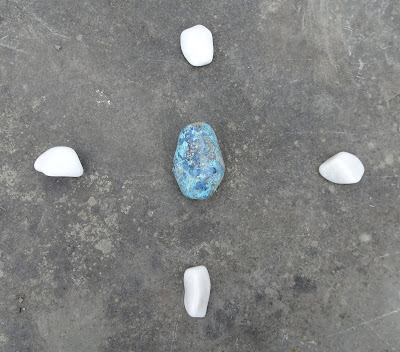 Meditation For All Affected by Recent terrorist Attacks

The focus for tonight's Crystal Earth Meditation, through 8pm GMT, is:

This meditation will use the  heart shaped chunk of rose quartz shown below. Hope you can join us. For further details of these meditations please go to the 'Work' section at www.crystal earthworks.net .